There can be several symptoms of having an enlarged prostate, which may vary from mild to severe, However, if not treated on time, the symptoms of benign prostatic hyperplasia usually go severe and become worse over time.

Common signs and symptoms of benign prostatic hyperplasia are:

Less common signs and symptoms of benign prostatic hyperplasia include:

CureIndia helps you choose the right doctor for your medical treatment. Most of the doctors in our associated hospitals have been internationally trained and are active members of many international medical councils and associations. Let's hear from some of the most reputed doctor's for Enlarged Prostate Surgery in India. 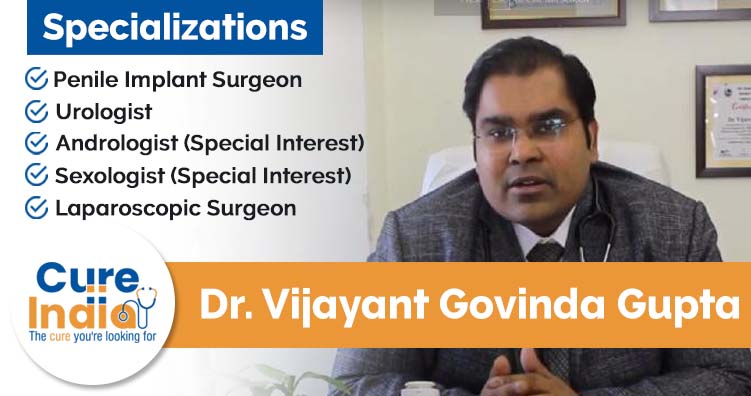 BPH is considered as a normal body outcome due to gradual ageing in the mean. Men above 75 years of age are more vulnerable to face BPH symptoms. The exact causes of benign prostatic hyperplasia or enlarged prostate are still not unknown, however, one or more of the following risk factors can be responsible in the enlargement of the prostate. They are:

Ageing: Men younger than the age of 40 rarely face signs and symptoms related to prostate gland enlargement. By the age of 60, about 1/3rd of men face moderate to severe symptoms of an enlarged prostate and by 80, almost 50% of the men do.

Family history: Having someone in the immediate relation especially, especially in blood relation who has or has had history of prostate problems also increases your risk of having benign prostatic hyperplasia.

Diabetes and Heart Disease: Men, specially on the older side having diabetes, as well as heart disease also carry an increased risk of BPH.

Lifestyle: Obesity is believed to a huge factor is increasing the risk of getting  benign prostatic hyperplasia, while exercising decreases the risk.

Most doctors today resort to prostate laser surgery to treat benign prostatic hyperplasia/ enlarged prostate. The doctor begins by inserting a scope via the tip of the penis into the urethra, which is a tube responsible for carrying urine from the bladder. The doctor then passes the laser light through this inserted scope. This laser beam is intense enough to shrink the size of the prostate by removing excess tissue that is hindering the urine flow. Lasers use intense beams of light which then produce concentrated and precise heat used to target the affected area.

There are many types of prostate laser surgery, which include:

Photoselective vaporization of the prostate: This type of laser light vaporizes the excess tissues present in the prostate, thereby making way for the urine to pass normally.

Holmium laser ablation of the prostate

This type of laser cuts and removes the extra prostate tissue which reduces the size of the urethra channel and blocks it.

After this, the doctor uses another instrument which cuts the excess prostate tissue into small pieces, which are easier to remove. This option of prostate laser surgery is best suited for men  having a severely enlarged prostate.

With certain advancements in the field of medicines, new techniques are adopted everyday which make many treatments less invasive and less complicated than the conventionally adopted and invasive surgical procedures to treat several health conditions.Getting an enlarged prostate laser surgery in India is a great decision in terms of quality of medical treatment, weather, and cost effectiveness.

Here are the advantages of enlarged prostate surgery:

The enlarged prostate surgery is suited to men who have bleeding disorders and take medication to thin their blood.

The enlarged prostate surgery is an outpatient procedure where the patient can be discharged the same day.

Less need for a catheter:

In invasive surgeries to treat an enlarged prostate, the doctor may require a catheter, so the urine is drained from the bladder. Whereas in enlarged prostate surgery, the catheter is required for less than a day.

Better results in a shorter time:

After the enlarged prostate surgery, you may immediately start seeing improvements in urinary symptoms.

Open up and get treated

Get back the Erection

Insecure about your size